New milestone on the thermophysical properties of geothermal fluids

The REFLECT project has recently achieved a new milestone related to the thermophysical properties of geothermal fluids. The project coordinator, Helmholtz Centre Potsdam – German Research Centre for Geosciences (GFZ) and the project partner French Geological Survey (BRGM) have worked on this task which is divided into three subtasks of different scope:

The main goal of this research is to better understand the thermophysical properties of highly saline geothermal fluids by a combination of analytical data evaluation, laboratory measurements and numerical modelling.

Experimental techniques to measure viscosity at elevated pressures and temperatures have been developed using a rock physical device transformed into a capillary viscometer. The accuracy of this apparatus has been tested with respect to the optimum choice of the capillary inner diameter against reference data for the viscosity of pure water at 25 °C.

Moreover, existing viscosity data obtained at GFZ for NaCl, CaCl2, and mixed solutions thereof at ambient pressure and temperatures up to 80 °C have been correlated using a modified Jones-Dole-Equation of the type:

Electrical conductivity is a classical experimental technique, predominantly used for the determination of transport and thermodynamic properties of dilute electrolyte solutions. While the electrical properties of binary solutions of alkali metal halides and alkaline earth metal halides are fairly well known up to supercritical conditions, little or no experimental data are available for bicarbonate dominated aqueous species, especially at elevated temperatures and pressures. Also for complex brines, containing more than one solute, conductivity data at hydrothermal conditions are still scarce. In this task, the electrical conductivity of aqueous bicarbonate solutions of different concentrations has been measured to determine limiting conductivities and association constants in dependence of temperature up to supercritical conditions. Also, mixed brines of various compositions have been investigated to deduce mixing rules for multi-component systems.

In a first set of experiments the electrical conductivity of multi-component brines, representing the composition of natural geothermal fluids and consisting of variable mole fractions of NaCl, CaCl2, KCl, NaHCO3, Na2SO4, K2SO4 was measured in a high-temperature flow-through cell up to 450°C. In a second set of experiments, binary carbonate solutions at various concentrations were measured in the flow-through cell to determine the limiting electrical conductivity up to 450°C and to extract information on the molar association constants for the ions in solution.

Modelling of density and heat capacity

One part of this task aims at modelling the fluid physical properties such as the variation of heat capacity according to changes of the chemical composition. The fluids of interest are mainly NaCl or CaCl-type. The models must take into account this specificity and the high salinity of the solutions. If existing models are able to simulate minerals solubility and heat capacity up to 200°C and halite solubility in NaCl-H2O systems, it is not the case for CaCl2-type waters, especially at high salinity and temperature.

In this task, BRGM has developed a new thermodynamic model for the H-Li-Na-K-Ca-Mg-Cl-H2O chemical system, from dilute solutions up to salt solubility, and for temperatures up to 250°C. This model relies on the Helgeson-Kirkham-Flowers (HKF) and the Pitzer equations, and considers the partial dissociation of the CaCl2 electrolyte. It has been implemented in the PhreeSCALE geochemical calculation software to compute properties such as heat capacity, enthalpy, and density of chloride chloride-bearing multi-electrolyte solutions in conditions relevant for the production of geothermal energy.

Regarding viscosity measurements, after the modification of the apparatus, systematic investigations with different capillary diameters and lengths as well as different flow rates were required. In addition, a sufficiently accurate determination of the fluid temperature within the measuring capillary had to be ensured. For measurements of pure water, the current setup (inner capillary diameter: 130 μm and length: 1.6 m) allows an accuracy better than about 2% as shown in Figure 1, where the relative error of the viscosity data of pure water compared to the NIST (US National Institute of Standards and Technology) database is shown for different pressure and flow conditions.

For viscosity, different literature-derived virial correlations were tested against existing data as shown in Figure 2 for the example of NaCl solutions at 25 °C as a function of molarity. It shows that the correlation established by Zhang and Han with four virial coefficients performs better than the original Jones-Dole-Equation (e.g. in Falkenhagen) and the one established by Out and Los. The experimental viscosity is reproduced fairly well by the former within the limits of experimental precision. 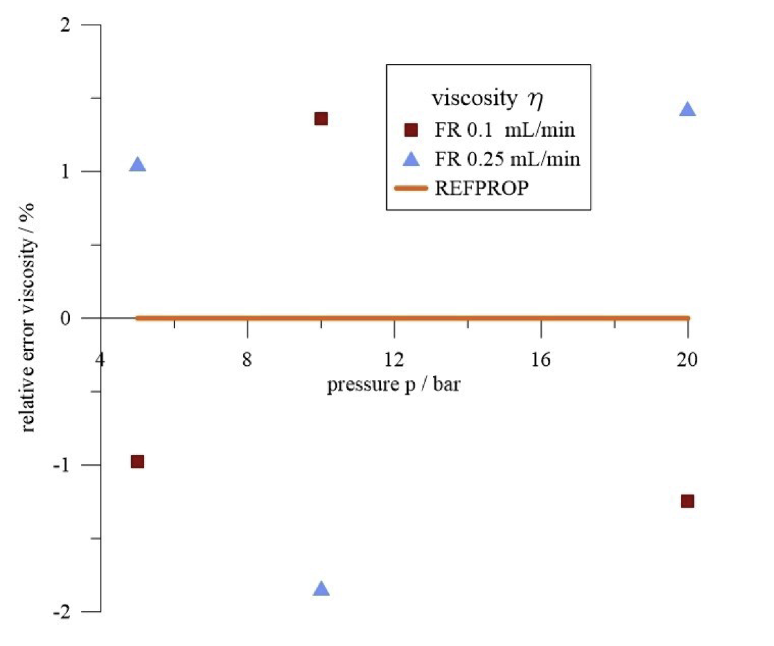 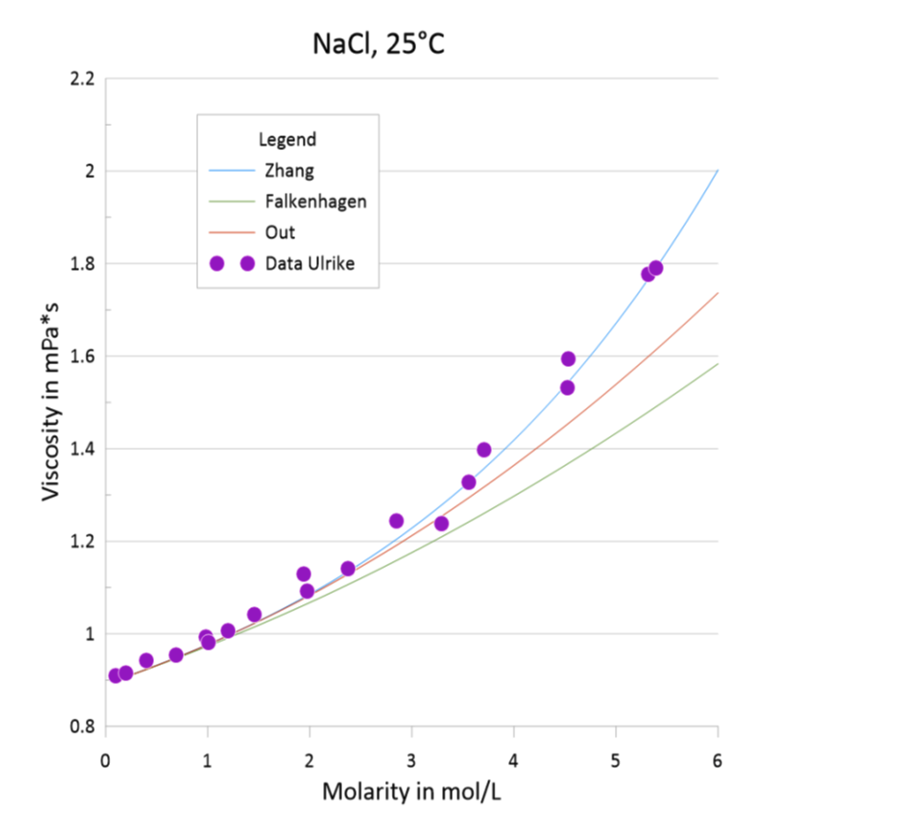 Figure 2. – Comparison of three different viscosity correlations (established by Zhang and Han, Jones-Dole / Falkenhagen, and Out and Los) with original experimental data (Ulrike Hoffert, GFZ) for NaCl solutions of various molarity at 25 °C.

Limiting conductivities of the binary aqueous NaHCO3 system were determined in the temperature range 24 – 450 °C from measured equivalence conductivities of solutions of 4 different concentrations (0.1 M, 0.05 M, 0.01 M, 0.001 M). It has to be noted that, in a first set of experiments, for temperatures between 150 °C and 350 °C the electrical signals became unstable due to electrode polarisation, leading to a high variability of conductivity data. This behaviour was accompanied by a fizzing of quenched fluid samples, indicating the degassing of CO2. Also, in this temperature range, pH values increased from neutral (pH 7.3) to pH 8.4 at 350 °C, and became neutral again after applying supercritical conditions.

Inherently, the dissociation of NaHCO3 can be described by a series of equilibria that occur:

At equilibrium conditions, all of the species are present in different amounts. While at low temperature the first dissociation step (A) seems to be favoured (solution pH is neutral), steps B and C seem to become increasingly important between 150 °C and 374 °C, indicated by an increasing pH and fizzing fluid samples. However, the generation of CO2 could be reduced significantly by coating the electrodes with Pt black, which enlarges the electrode surfaces and consequently reduces the current density. This measure considerably improved the quality of electrical signals.

Modelling of density and heat capacity

The new thermodynamic model allows describing solution properties and phase diagrams of aqueous chloride systems bearing calcium, up to elevated temperatures. This model accounts for the aqueous speciation of the CaCl2 electrolyte, according to the partial molar properties of the Ca2+, CaCl+, CaCl20 and Cl– aqueous species described by the HKF theory.

The new model applies up to 250°C in the binary CaCl2 aqueous systems (Figure 2). It can also apply to ternary systems containing other major alkaline and alkaline earth cations, namely Li, Na, K and Mg, up to temperatures generally above 100°C. The model becomes unstable for ternary systems and temperatures above 200°C. Therefore, it needs improvements, but at this time and to our knowledge it is the only model with such capabilities that can be used with a free geochemical code like PhreeSCALE.

Figure 3. – (left) comparison of calculated osmotic coefficient values of CaCl2 aqueous solutions (lines) with experimental data (symbols) up to saturation. (right) solubility of the various hydrates up to a temperature of 230°C and a total electrolyte concentration of 29.5 mol.kg-1

With this work the REFLECT project has achieved a new milestone, ‘Thermo-physical parameters of synthetic fluids measured and correlations established’ which will contribute to provide recommendations on how to best operate geothermal systems for sustainable use.