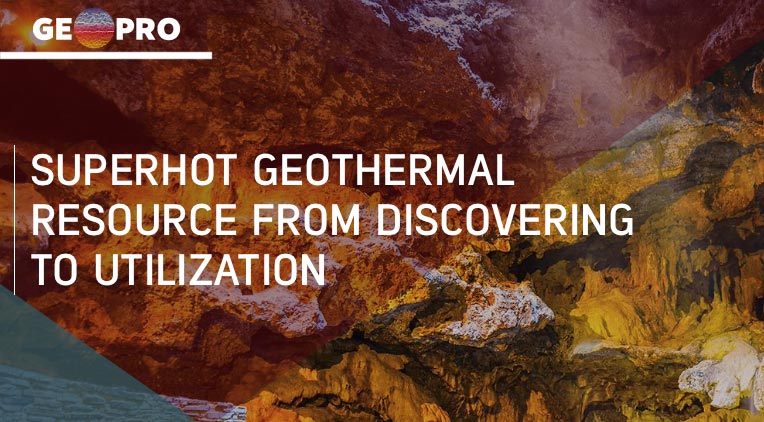 The GEOPRO consortium is pleased to announce its 1st free to attend webinar on “Superhot geothermal resource: from discovering to utilization”. The webinar will be presented by Prof. Andri Stefánsson, Institute of Earth Sciences, University of Iceland on 18th November 2021 at 13:00 -14:00 BST.

Fluids may reside at deeper levels in active geothermal systems than have been conventionally utilized, in the vicinity of the magmatic heat source where temperatures exceed the critical point of water (Tc = 373.98 °C). Indeed, such superhot fluids have been intersected by drilling in several active geothermal systems around the world and represent highly attractive targets for future energy production owing to their anomalously high heat contents. Harnessing such superhot fluids may become an important source of energy for the future. Wells discharging superhot fluids have the potential of generate up to ten times more power than conventional geothermal boreholes and several research programs are already advancing this science, for example in Japan, Iceland, New Zealand and Italy.

Recent reservoir modelling indicate that superhot fluids are formed around the heat source in magma-driven geothermal systems. However, fluid chemistry of such superhot fluids is largely unknown. Current thermodynamic formulations do not apply at these extreme conditions, making predictions difficult. However, superhot fluids recovered from well IDDP-1 at Krafla (Iceland), with temperatures of 440 °C, were characterized by low concentrations of the rock-forming elements (Si, Na, K, Ca, Mg, Al and Fe) but displayed similar volatile element (C, S and Cl) concentrations as the overlying, subcritical (<300 °C) “conventional” reservoir fluid considered to be the source of the superhot fluids. In other cases, superhot fluids may be more influenced by magmatic volatiles.